In my previous post I discussed how I came to be interested in probabilities, after having spent about a decade (which refers to a period of time of 10 years, and is not in any way associated with decadence… O_O (12’20”) ) making use of tools that assumed or did some calculations with probabilities. I mentioned it because it was interesting for me to realise what had made me care about it and seek out to learn more and because it might be interesting for other people. Who knows, may be you are struggling to find the motivation or interest in the topic necessary to really dig down into it, like I did. In that case may be going through those same things will help you find the focus you need.

If you’ve been one of the 150 or so people who make daily visits to my other website, Place du Luxembourg, you’ll also  have heard me go on about the Roman Empire. You’ll have noticed that I posted something about the evolution of the Roman Republic towards the Empire. You may have also read in other posts that I have not been writing because I’m trying to figure out some things about the fall of the Roman Empire. I’m still working (sporadically) on a final draft of that post, which after this much time cannot possibly measure up to my expectations, but anyway, I digress…

Nevertheless, I came across some interesting facts about autocrats and their regime. As it turns out it’s a pretty accidental lifestyle, characterised by an exponential distribution. But more importantly: Why and to what effect?

The Duration of the Rule of Roman Emperors

The point is, last week I was looking at the crisis of the third century how the empire survived it, whereas it collapsed in the late 400s and I decided to count the number of emperors during the crisis of the third century and compare it with the number of emperors during the Principate. I was doing it for kicks, so I just went on wikipedia and got the years for the beginning of the reign of each emperor. Nothing too formal, but hopefully informative enough. As it turns out you can see the chaos in the figures. So then, just out of curiosity I decided to calculate the duration of the reign of all the emperors up to Carinus, which was the last emperor of the Crisis of the third century (the Dominate, the next period is generally considered to have begun with Emperor Diocletian in 284).

And that’s when I realised it: I suddenly found myself holding on to a distribution of reign durations for the first 3 centuries of the Roman Empire. After staring at the data for a while, I realised I could organise the data and get a ranking of the duration of the rule of the different emperors.

Rearranging it, I was suddenly looking at an exponential distribution.

Based on this, I could calculate an Empirical CDF curve and from that I could try to figure out what the theoretical CDF would be. Literally, you can do any and all of this with MS Excel… all you need is the data and you can calculate the parameter of the theoretical pdfs, lambda. With that, the data and the formula for an exponential distribution you can then calculate the theoretical CDF. My data was not very detailed so I ended up with quite the gap between the two, although after some testing I ended up showing that it is an exponential distribution. 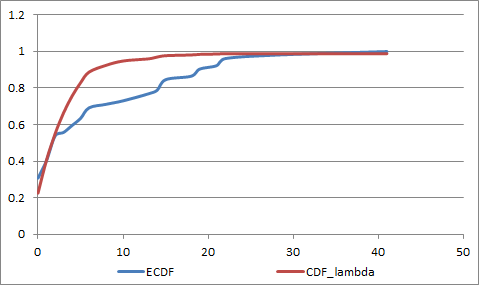 Which is nice because people with better data and more sophisticated methods came to the same conclusion.

According to Khamaladze, Brownrigg and Haywood (2005) [KBH(2005)] who looked at this question in a lot more detail,

“Statisticians know very well that if in a course of time some events, like emissions of radioactive particles, traffic accidents, occurrence of abnormally high prices on stable markets, etc., take place at random moments and if the random times elapsing between them have exponential distribution then these events occur purely at random, in an unexpected, unprepared and unpredictable way.

The life-lengths of human beings can not have the nature of exponentially distributed random variables – human organisms accumulate damages, suffer from illnesses and stresses and, in a word, are aging. Apart from pure accidents, humans die as the result of this aging.”

Another question the authors ask is why the distribution looks the way it does. They offer two answers that make sense on their own and as complements. The first is basically, that being a leader in that type of absolutist regimes is a constantly brutal thing, where only the toughest stay on top and everyone is always subject to a lot of competition, whether in peace or war. They suggest that they lead a life akin to being exposed to that of people who die from accidents. However they are not convinced. They argue that although such leaders may be exposed to a lot of competition they should also enjoy strong support, in what appears to be an argument that the two should cancel out in a way. They conclude by saying something about this that sounds very profound but the meaning of which completely eludes me:

” In probability theory we know that typically the occurrences of an unusually high level of a stationary random process form a Poisson process, see, e.g., (Cramer and Leadbetter, 1967) [also here?] or (Resnik, 1987) with, therefore, exponential distribution of interoccurence times.”

Unconvinced, the authors  postulate that a simpler reason might be that Emperors tended to be old by the time they reached power, in which case they just died of natural causes due to advanced age, which they argue would be difficult to distinguish from an exponential distribution.

The resulting situation would imply different hypotheses. In the first “accidental case”, it should lead to a decrease in the emperors’ life span after gaining power, whereas this should not be the if it is just a natural cause.  If the second hypothesis is correct, then the distribution of the duration of the rule of young emperors should be different from the one of young emperors. However, they don’t find a statistically significant difference between the distribution for young and old emperors, implying that indeed the distribution is exponential.

But what’s the use in this? – What do I get out of realising that the distribution of the duration of the reign of different Roman emperors follows an exponential function?

Clearly there’s a lot of things we could learn. Above, I just highlighted 5 quite basic and interesting things I wasn’t taught in political analysis, political economy or political theory. Now let me see how I can explore them a bit further….

2 thoughts on “The Probability of Roman Emperors”